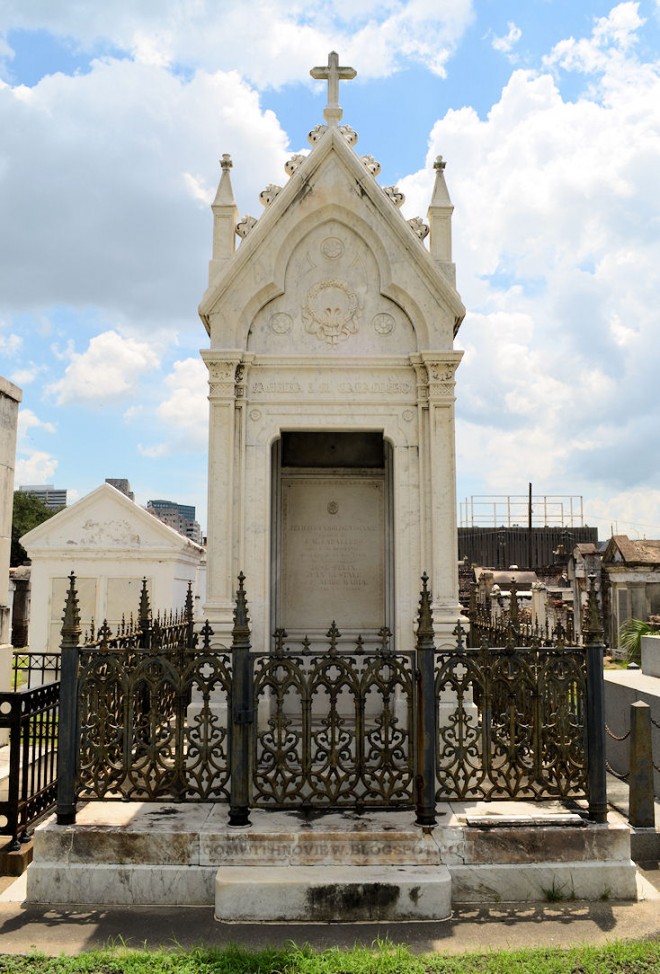 Jacques Nicolas Bussière de Pouilly had a profound impact on New Orleans architecture in the nineteenth century, and some of his most original, innovative contributions are funerary monuments that still stand in the city’s cemeteries today. Born in a small French village, he may have studied at the École des Beaux-Arts in Paris before arriving in New Orleans, Louisiana in 1833. However, his enrollment at the school has thus far not been confirmed. In New Orleans, de Pouilly made significant architectural contributions, such as the St. Louis Exchange Hotel and work on St. Louis Cathedral. Although smaller in scale, some of de Pouilly’s most important and inventive designs were for funerary monuments. In New Orleans, the deceased are interred in tombs above the ground due to the city’s below-sea-level elevation and high water table. Since flooding there can lift caskets from their graves, New Orleans follows the French and Spanish tradition of burying their dead above ground in tombs and vaults, some of the most elaborate of which de Pouilly is responsible for creating. They are laid out in rows along paths, a pattern that resembles a city and gives these cemeteries the nickname “Cities of the Dead.” In his funerary monument designs, de Pouilly was heavily influenced by Père Lachaise Cemetery, the largest cemetery in Paris with which de Pouilly would certainly have been familiar. Ann Merritt Masson writes, “Père La Chaise was the most renowned, most published, and most imitated cemetery of the time, and it must have been especially admired by the large French-speaking population in Louisiana,” making it the perfect example for de Pouilly to follow. His designs also echo the revolutionary new architectural theories of the time that were popular with young students at the École des Beaux-Arts. These students rejected strict, classical principles in favor of a new style that developed into the Néo-Grec. De Pouilly combined these ideas with Classical Revival, Gothic, and Egyptian styles to create imaginative designs for New Orleans funerary monuments. 130 of these designs, dated from 1834 to 1874, are contained in a sketchbook of de Pouilly that is now in the possession of the Historic New Orleans Collection. While some of these plans were apparently never carried out, some of them still stand in the cemeteries of New Orleans where they attest to the creativeness of de Pouilly and the architectural impact that he had on the city of New Orleans. 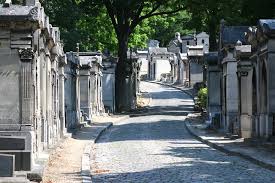 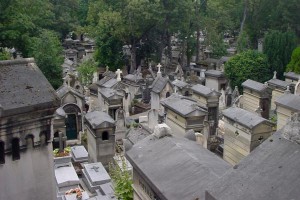 These are photographs of Père Lachaise Cemetery in Paris, France. It is also known as the Cimetière de l’Est and was established in the year 1804 as the first metropolitan cemetery of three in the city of Paris. Revival styles of architecture were frequently used for monuments, as they were “versatile and applicable to cemetery designs in form and symbolism.” Classical, Gothic, and Egyptian Revival styles were the most popular, and Père Lachaise profoundly impacted de Pouilly’s own mortuary architecture style and designs. 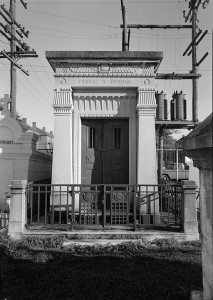 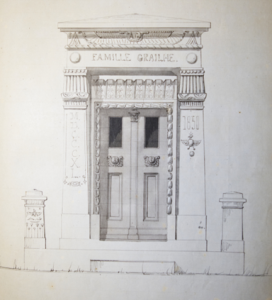 Of de Pouilly’s 130 sketchbook designs, only eight drawings depict the Egyptian Revival style, which suggests that de Pouilly favored classical styles over Egyptian. This tomb is located in St. Louis Cemetery Number Two and was constructed from one of two designs for the Grailhe family in 1850. It is one of the eight sketchbook designs in the Egyptian Revival style. The tomb contains a chapel, and while its massing is like that of de Pouilly’s temple-fronted structures, the columns here are semi-engaged. This creates less of a portico and more of a projection on the façade. The cast-iron fence surrounding the monument contains Egyptian motifs and is not common in New Orleans, and De Pouilly likely created it specially for the Grailhe tomb. While the tomb is Egyptian-inspired, the specific elements are not entirely archaeologically accurate. Egyptian elements on this structure include banded roll moldings surrounding the door, papyrus plant motifs, and several winged discs. 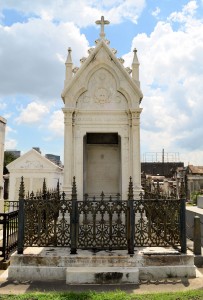 The Gothic style was very popular for mortuary architecture in the 1840s and 1850s, partly due to the appeal of religious association for burial, but the Gothic style was not as widely used by de Pouilly. One of his most significant Gothic monuments is the J.M. Caballero tomb, which was chosen from three possible designs and built around 1850 in St. Louis Cemetery Number Two. In addition to an emphasis on verticality, the tomb’s Gothic elements include relief work decoration on all sides and a cast iron fence that mirrors ornate tracery characteristic of the Gothic style. As also seen in the fence of the Grailhe tomb, de Pouilly often designed fence patterns to match the style of his funerary monuments. 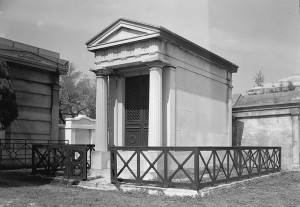 The Peniston-Duplantier mausoleum is an example of de Pouilly’s classical designs, a style that he and his clients generally preferred to Egyptian and Gothic. According to Peggy McDowell, this tomb was constructed in the prostyle design, which generally featured “a building with front portico supported by free standing columns.” The columns here are of the Greek Doric order. Another common feature of tombs in Père Lachaise that de Pouilly frequently employs is the iron fence that surrounds the monument. As de Pouilly worked in a variety of styles, he always made sure that the style of the fence matched the style of the monument it enclosed. This can be seen here with the repeated geometrical design of the fence surrounding a Classical revival structure. 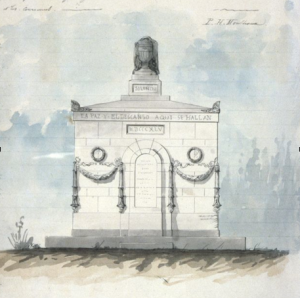 Peggy McDowell defines a society tomb as “a monument with multiple vaults used by members of an organization such as a fraternal or benevolent society or a society especially organized to assure members of a burial vault within the crowded cemetery.” de Pouilly created ten designs for society tombs in his sketchbook, and five of these were actually built. The Iberia Society tomb, constructed for a Spanish benevolent society, is one such monument and is located in St. Louis Cemetery Number Two. This type of monument is comprised of an efficient stacking of burial vaults along the walls, allowing for as many spaces for entombment for the society’s members as possible. The actual constructed monument was simplified from the sketchbook design and lacks the inverted torches, garlands, and wreaths originally intended to decorate the tomb. This simplification was most likely due to expenses, and Masson suggests that de Pouilly’s “design skills appear to have exceeded his client’s purse.” 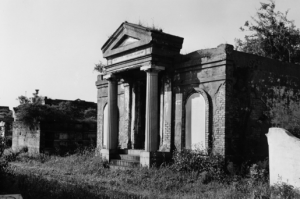 Another society tomb like the Iberia Society tomb already discussed, the Society Tomb of the New Lusitanos Benevolent Association was located in Girod Street Cemetery but has since been demolished when the cemetery was destroyed in 1957. Although several designs for this monument are contained in de Pouilly’s sketchbook, the design eventually chosen is not. The client chose a heavily-pedimented temple front with Greek Doric columns, a popular style during the time period that appears to have been widely in demand among de Pouilly’s patrons. The arched forms originally contained inscribed tablets. This monument is the largest of de Pouilly’s designs that was constructed. This monument represents the less common form of society tomb. Unlike the Iberia Society tomb, the Society Tomb of the New Lusitanos Benevolent Association is a structure that encloses the burial vaults, consisting of a central hallway flanked by vaults on both sides. 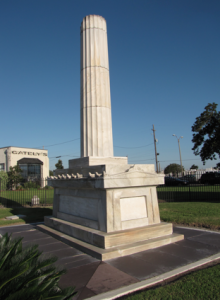 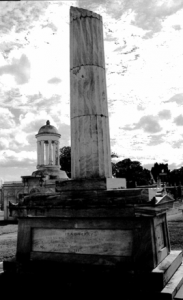 The memorial column is a symbolic antique form of monument, used by both the Greeks and Romans and employed by de Pouilly to commemorate three noteworthy New Orleans citizens. One of these was Irad Ferry, a fireman who lost his life while performing his duties. A white marble monument in Cypress Grove Cemetery was constructed by the Council of the First Municipality to honor this young man. It consists of a fluted, Greek Doric column that is broken and resting atop a sarcophagus base that is heavily influenced by examples from the Père La Chaise cemetery in Paris. The broken column is meant to represent Irad Ferry’s sudden death, and “to illustrate, by a broken shaft, a column, rising in strength and sapped midway–the sudden cessation of life in its prime and vigor.” 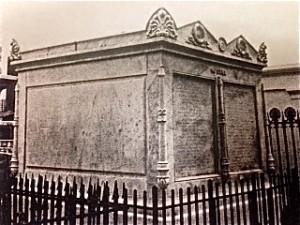 This tomb, which is located in St. Louis Cemetery Number One, is almost an exact copy of the Hannecart tomb in Père Lachaise Cemetery in Paris. This is a great example of the heavy influence Père Lachaise had on de Pouilly’s designs. While most of de Pouilly’s mortuary architecture bears his signature, the McCall and Jones families’ tomb does not. Peggy McDowell suggests that de Pouilly did not officially sign this structure because it was “too eclectic a copy of another’s design.” The design for this monument is not contained in de Pouilly’s sketchbook. The inverted torches located along the front of the tomb are representative of an extinguished life.

Working in New Orleans, Louisiana in the nineteenth century, Jacques Nicolas Bussiere de Pouilly created inventive mortuary architecture designs that utilized Classical, Gothic, and Egyptian Revival styles. These structures are located in the “Cities of the Dead” of New Orleans, which are above-ground cemeteries that the city is known for and which are necessitated by New Orleans’s below-sea-level elevation. In addition to the Revival styles, de Pouilly was heavily influenced by his French heritage, often relying on Père Lachaise Cemetery in Paris for inspiration. From mausoleums to society tombs to sarcophagus-based tombs, de Pouilly created a wide variety of mortuary architecture that comprised an outstanding contribution to the unique cemeteries of New Orleans.

Upton, Dell. “The Urban Cemetery and the Urban Community: The Origin of the New Orleans Cemetery.” Perspectives in Vernacular Architecture, vol. 7 (1997): 131-145.