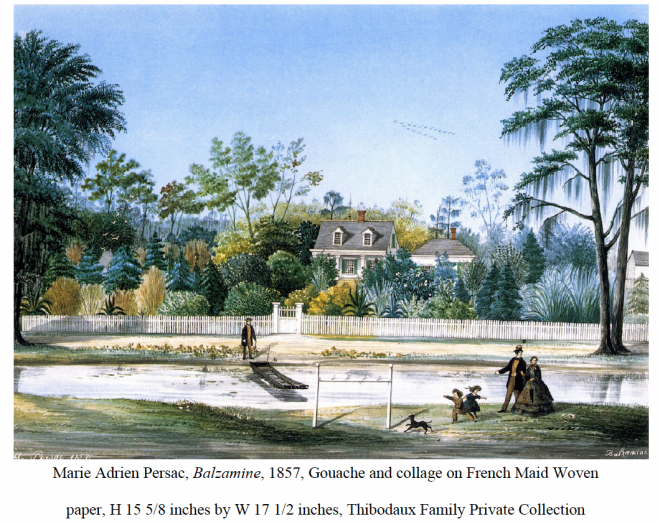 Marie Adrien Persac: Louisiana Artist
Marie Adrien Persac (1823-1873) was a Louisiana artist in the mid-nineteenth century. Persac is best known for his many surviving plantation landscapes, but Persac also painted many maps and multiple view of Canal Street in New Orleans. Persac signed most of his works as A. Persac, assuming he went by Adrien Persac rather than using his full name. Adrien Persac was born Saumur, France, where he worked as an engineer, architect and cartographer. The year is uncertain, but Persac was said to have immigrated to America around 1842 at age nineteen or twenty years old. Scholars are unsure how in ended up in Louisiana or how he met his wife Odile Daigre, but Persac and Daigre were married in December of 1852 in a church in Baton Rouge. The couple had three sons and lived together in Persac’s in-laws’ home on the Bayou Manchac. Throughout his childrens’ young lives, Persac worked in photography and cartography. There are also records of Persac’s drawings of Baton Rouge that were engraved into maps of the city. In 1856 Persac entered a photographic partnership with William G. Vail, where they published advertisements in multiple local newspapers. Even with a variety of occupations, drawing and painting were Persac’s preferred craft. Persac completed small watercolor, gouache, and pen-and-ink sketches of seascapes and landscapes of both Europe and south Louisiana. In 1859, Persac moved to New Orleans and painted transparent watercolors of houses and plot plans for the city’s Notarial Archives. During the Civil War, as a French foreigner, Persac was not forced to join the military and he was also free to move between regions completing commissions. Until the end of his life in 1873, Persac remained in New Orleans where in 1869 he founded his own Academy of Drawing and Painting. In the academy, Persac taught portraiture and landscape painting in oil and watercolors. Unfortunately, no portraits painted by Persac have ever been found. Persac was a man of many skills and talents, and this is most evident in his famous landscape paintings. Persac’s landscapes gives people insight into the plantations views in Louisiana. All of Persac’s landscapes consist of views of plantation homes from a high angle. The landscapes show aspects of Louisiana nature, including tree lines and water views done in colorful watercolor paint. Some landscapes have multiple views made of each plantation in order to gain an overall view of the land. These paintings still exist, but some plantations were destroyed and the paintings are the last depiction of the long lost landscape. Most of Persac’s works show the popularity of landscapes in the South during the mid-1800s. His landscapes also reveal the original style and the style of the era. This exhibit is intended to honor Adrien Persac as a recognized painter of the midcentury Louisiana plantation. 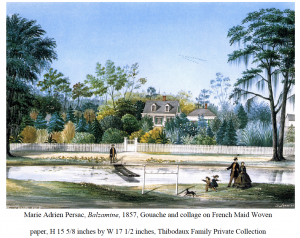 Persac’s Balzamine which depicts Bannon Thibodaux’s home on Bayou Terrebonne. The painting looks down on the house is slightly visible beyond the garden filled with a variety of Louisiana plants and trees such as elm trees, maples trees, lavender, crepe myrtles, sasanquas and camellias. But the landscape also holds some exotic plants such as deodar cedars from India. The garden is contained within a white fence, which is a common sight in most of Persac’s Louisiana plantation scenes. The house is a mid-nineteenth century style home with a central chimney besides a smaller building to the right of the main house that would most likely be the kitchen and servants’ quarters. The figures along the bottom half of the painting on either sides of the bayou are collage, including the dog and tethered ferry boat that would be tethered across the water 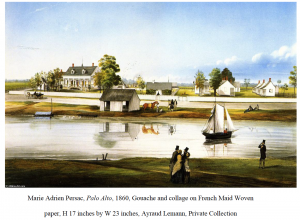 Persac’s Palo Alto holds a very unusual story behind the landscape. Unlike most of Persac’s commissions, this painting is not signed. But Persac’s style can be identified and compared to many of this other landscapes and can be identified and claimed as his own work. According to family story this painting was given as gratitude gift to the Ayraud family after a man asked to take lodging at Palo Alto. This story is very similar many of his other works that were unsigned and later discovered to be Persac works. This includes multiple buildings divided by white fences such as the main house, in the middle a smaller schoolhouse covered in vines, and next to that are slave quarters. In the background, the viewer can see the smoke of a sugarhouse visible in the middle of cane fields. In the foreground are collage figures surrounding the one edge of the water and also horse stables accompanied by a horse and smaller figures. Most of Persac’s figures are collage and taken from local newsprints then attached to his watercolor paintings. 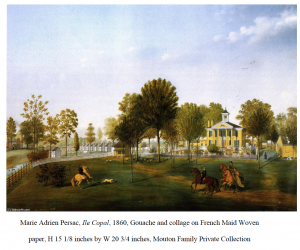 Persac’s Ile Copal was the home of Alexander Mouton, U.S. Senator and Governor of Louisiana. The house was built near Bayou Vermilion, which is now Lafayette. The plantation consists of the main house is rather elaborate and large with two wings attached to either side of the house, one most likely being the governor’s office. The yard is border with a large fence containing a garden many exotic plants. Outside that main house border are multiple fields, in the background you can see the homes of slaves quarters and in the foreground is a yard holding a chicken coop and many trees gracing the landscape. To the far right is another service building and then closer to the viewer are four collage figures riding horses with a dog on one side of a rider. 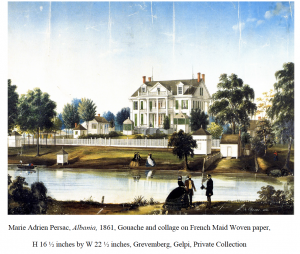 In Persac’s Albania, the elaborate main house is in the middle of the painting surrounded by a square post fence. The plantation home still stands today and the house’s façade still shows the colossal box columns and portico supporting the upper balcony with full windows lining the siding of the house. Charles Francois Grevemberg built the house between 1837 and 1842. As in all of Persac’s plantation views all figures are collage and the nature included enhances the overall painting, such as the oak trees standing at the fence, along with crepe myrtles by the outbuildings, and on the banks of the bayou are bundles of Louisiana iris. 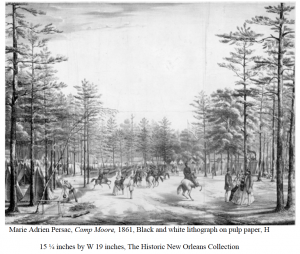 Persac not only made landscapes painting of plantations, but he also engraved lithographs. There are only two copies of this New Orleans print in existence. Camp Moore was located in Tangipahoa Parish and the camp was an initial training ground for the Confederate Army during the Civil War. The picture depicts lines of tents along with enlisted men and officers interacting together. Along the tree line surround the crowd of a mix of a few civilians and officers on horseback. Persac’s print is meant to show the camp in a lighthearted mood and in hopes that the war will be over in a couple of weeks, rather than the war lasting years. 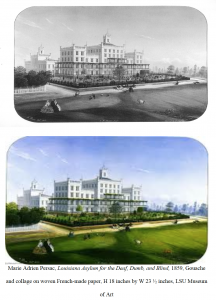 This Asylum was said to be the second-largest building in Louisiana. Persac’s painting renders the building is Gothic Revival-style well. James Dakin’s Statehouse inspired the style. The landscape has his typical style with the high view onto the ground with the large building in the background, surrounded by a large black gate, and then in the foreground there are scattered collage figures around the yard. Persac actually drew himself in the middle foreground painting, while another man looks over his shoulder. 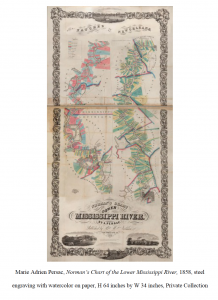 Persac’s five foot long map, known as “Norman’s Chart” was one of the first works he was recognized for when he worked as a cartographer. Upon first coming to Louisiana, the map of the river was published from New Orleans to Memphis. The engraving is color-coded and labeled along side the river design and also included four views Baton Rouge, New Orleans, a sugar plantation and a cotton plantation. Persac was a master surveyor and possibly travelled up and down the river many times, but most of the information could have been received from parish records. This map proves that Persac was not only a fantastic painter, but he had many other talents as well, including cartography. 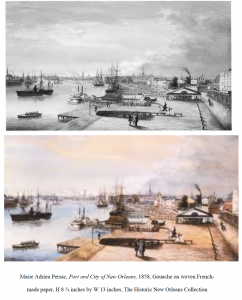 Persac painted this view of the City of New Orleans as a prototype for the “Norman’s Chart”. The scene shows a view of the port in the foreground of the painting including multiple boats and docks, along with the City of New Orleans seen from a far in the background of the painting. Persac’s focus was to display the curve of the Mississippi River and display the loading area for cotton bales and other merchandise. Just after Persac’s drawing was finished many more docks and piers extended along the waterfront. 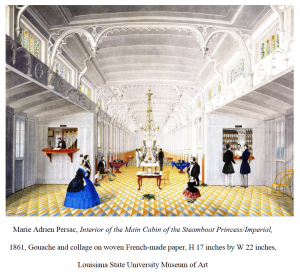 Persac’s Interior of the Main Cabin of the Steamboat Princess/Imperial is one of his well-known gouache depicting the interior of a pre-Civil war Mississippi River Boat. This watercolor shows beautifully painted architecture and great one-point linear perspective. The scene shows the luxury of steam boating in the mid-nineteenth century. The foreground figures are painted on, but following his typically style, Persac collaged the figures starting from the first waiter on the left to the figures lined together in the middle receding back. 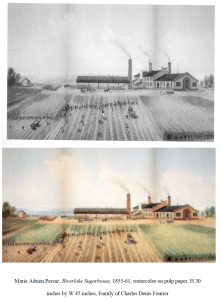 Persac’s Riverlake Sugarhouse displays the scene of a working sugar plantation. The two-story mill is a continuation of an earlier one-story sugarhouse. The landscape is completed with sugar can planted in rows. Sugar was one of the major cash crops that of grown in southern Louisiana because of the extreme weather. The landscape displays the enslaved workers digging in the field, which is not typically seen.
This exhibit is intended to display Persac’s beautiful landscape works in honor of a great painter that should be recognized as a very important painter of the Louisiana plantation landscapes. Persac was an architect, cartographer, engineer and painter. As a man of many talents, Persac’s work contributes to knowledge today for the insight of what many plantations in Louisiana looked like in the mid-eighteenth century. His high angled view of many plantation homes and Louisiana nature shows how the style evolved. And then his inclusion of many slave houses and enslaved figures show how the Southern American Art grew to depict life as it actually was just before the Civil War, rather than just painting a pretty landscape that did not contain history of the culture in the South. Persac’s landscapes display that many attributes that show the growth away from the dominant portrait style that Southern American art is more known for.
Bibliography
Bacot, H. Parrott, Barbara SoRelle Bacot, Sally Kittredge Reeves, John Magill, and John H. Lawrence. Marie Adrien Persac: Louisiana Artist. Baton Rouge: Louisiana State University Press, 2000.